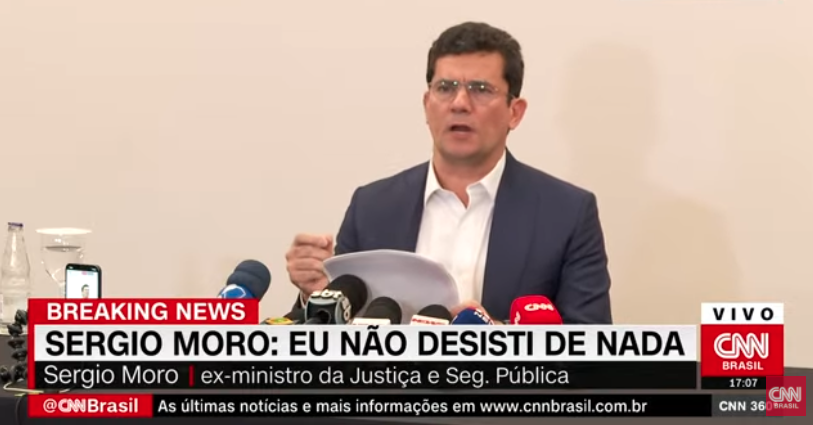 A day after announcing that he would be bowing out of the presidential race, former Justice Minister Sergio Moro held a press conference to make a U-turn on his previous U-turn. “I haven’t given up on anything, especially on my dream to change Brazil,” he told reporters.

The former judge, who switched parties yesterday due to a lack of support from within his own ranks, added that the work of forging a “third way” – to break up the two-horse race between President Jair Bolsonaro and former leader Luiz Inácio Lula da Silva – must not be an individual endeavor. Naming other presidential hopefuls, he asked for others to make “selfless acts” in order to create a unified candidacy of the democratic right.

“Brazil needs an alternative to rid itself of the extremes, of instability, and of radicalization,” he said, stressing one of his main talking points — the construction of a false equivalence between the center-left Lula and the far-right incumbent President Bolsonaro. Mr. Moro said he wouldn’t run for a lower house seat.

But the path to a presidential candidacy is less than straightforward for the former judge. União Brasil, his new party, was created late last year as the merger of two parties — only one of these wings supports Mr. Moro’s presidential hopes.

Mr. Moro’s 360-degree turn mirrors that of João Doria, who yesterday threatened to pull out of the presidential race only to say he will indeed throw his hat into the ring. Both men account for only 10 percent of voting intentions combined – well behind Mr. Bolsonaro (26 percent) and Lula (43 percent).