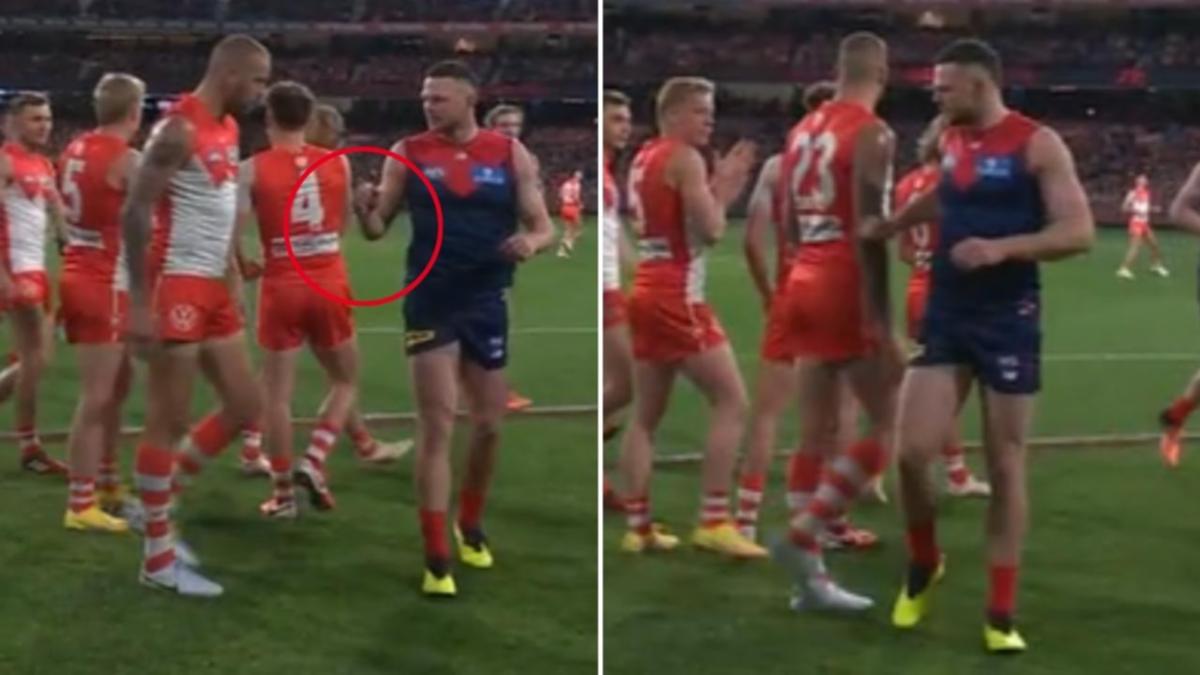 Steven May and Lance Franklin were at each other all night in Sydney’s 22-point AFL qualifying final win over Melbourne, and we should’ve seen it coming.

Because there was a little pre-game clue.

WATCH IN THE VIDEO ABOVE: Buddy snubs May pre-game

Their early tension boiled over into the flashpoint of the game during the second quarter when May gave away two ill-disciplined free kicks inside a minute which resulted in an easy Will Hayward goal for Sydney.

That didn’t stop the fireworks though, with the pair continuing to tussle with other in the aftermath of Hayward’s goal.

Until that point, the Demons were in control of the game. But Hayward’s goal was a major boost for the Swans, who managed to claw back within one goal at half time.

Despite the Dees’ three quick goals at the start of the third quarter, the Swans controlled the majority of the second half, suffocating the hosts with relentless pressure under which they crumbled.

Despite becoming the resident antagonist of the night, May’s performance on Franklin was admirable, taking a number of intercept marks and keeping the superstar forward to seven touches and no goals in a clear individual win.

That might have been part of the reason Franklin was so frustrated, as mini spot fires between the two continued on for most of the night.

If you were paying close attention pre-game, though, there was a little clue that the heated contest was always going to flare up.

Watch the moment in the video above

May walked up to Franklin before the first siren to wish him good luck.

With an outstretched fist, May attempted to bump knuckles with Franklin.

But the greatest power forward of the modern era completely brushed May as if he weren’t even there.

May was left red-faced by the snub, but soon got revenge with six intercept marks in the first quarter alone.

Despite his sub-par performance though, it was Franklin who had the last laugh as Sydney booked their spot in a preliminary final for the first time since 2016.

For the Demons, however, they have a date with Brisbane next Friday night at the MCG in a do-or-die semi final.

“Our situation hasn’t changed, any team in the competition’s got to win three games in a row to win it,” Demons coach Simon Goodwin said.

“Our challenge is to do it next week and get that first win away against Brisbane, who played a fantastic game. We need to learn from what we did and execute better when we get our chances.”

It was an even performance from Sydney, with Lloyd, James Rowbottom and co-captain Luke Parker the leading possession winners and Tom Papley, Tom Hickey and Sam Reid all playing crucial roles.