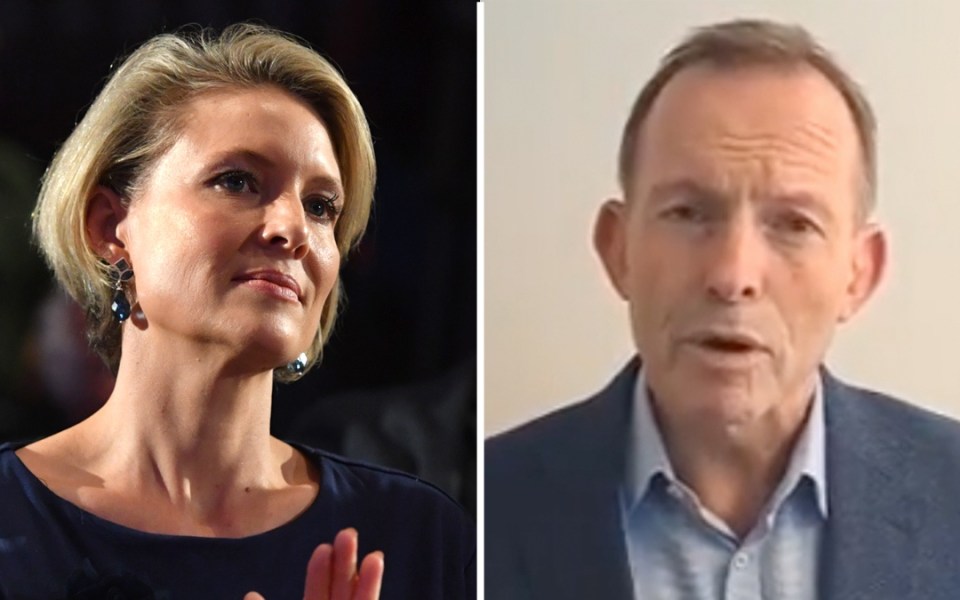 Former prime minister Tony Abbott has released a video plea to voters in his old Sydney seat to “get behind” controversial candidate Katherine Deves amid rising anger among local Liberals.

Ms Deves, who is Prime Minister Scott Morrison’s hand-picked candidate for the plum seat of Warringah, has sparked anger for her repeated and inflammatory views on transgender children.

“The more I see of Katherine Deves the more impressed I am with her courage, with her common sense, with her decency and with quite frankly her capacity to win this seat back for the Liberal Party,” Mr Abbott said in a video sent to members by the Liberal Party’s Warringah federal electorate conference on Thursday.

Mr Abbott lost Warringah in 2019 to independent Zali Steggall, who is in pole position to win again on May 21.

“I really do urge all Warringah Liberals to get behind our candidate. She is our candidate, she’s doing a good job, and she deserves to be supported,” he said in the video message.

“Whatever faults we might see in the selection process, we’ve got to do this, to get behind her for our community, for our party, for our country, and to help give the Morrison government the victory that our country needs.”

It is not the first time Mr Abbott has gone public with his support of Ms Deves. A month ago, as calls for her to be disendorsed grew, he praised her as a “tough, brave person” and slammed the criticism as a “pile on”.

She has repeatedly refused to apologise for her transgender remarks, including erroneous claims that trans teenagers are being “surgically mutilated” in Australia. But Mr Morrison has been firm in his support for her, arguing more women are needed in politics.

An 6000-strong trove of Ms Deves tweets from 2020-2022 – before her account was deleted – revealed last month included reams of controversial anti-trans statements, as well as erratic comparisons with Nazi Germany and the Holocaust.

At the time, a senior NSW Liberal source told The New Daily that Mr Morrison was “facing uproar” across the party for his captain’s picks in the NSW seats, including Warringah.

Furious Warringah Liberals have reportedly abandoned Ms Deves’ campaign. Some are unhappy about her comments and others are offended at the way she was parachuted into the formerly safe Liberal seat.

According to reports in the Nine newspapers, local volunteers have instead aided the Liberals’ campaign in other seats – including North Sydney, Wentworth, Reid and Bennelong – where they are knocking on doors, handing out flyers and staffing booths.