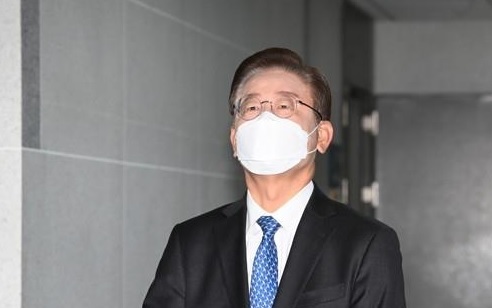 The main opposition Democratic Party on Thursday announced that it shortlisted three candidates, including the party’s former presidential candidate, Rep. Lee Jae-myung, for its new chairperson.

Rep. Park Yong-jin and Rep. Kang Hoon-sik were also shortlisted as candidates seeking to be the DP’s new leader, the party said, without disclosing the number of votes they received.

Lee told reporters his shortlisting “understands that our DP means to become a competent alternative party trusted by people, not a politics of reflection waiting for the failure of the other party.”

Park emphasized: “Change is the only way to win. We need to innovate to make us bigger.”

Kang said he will “create a new wind of change and open up the future DP through innovation.”

The DP plans to hold a national convention on Aug. 28 to elect a new leader, and Lee’s bid for party leadership has been a point of contention within the DP amid a power struggle between pro- and anti-Lee lawmakers.

Supporters say Lee is the right person to lead the party, while opponents argue he should take responsibility for the party’s defeat not only in March’s presidential election but also in June’s nationwide local elections. (Yonhap)