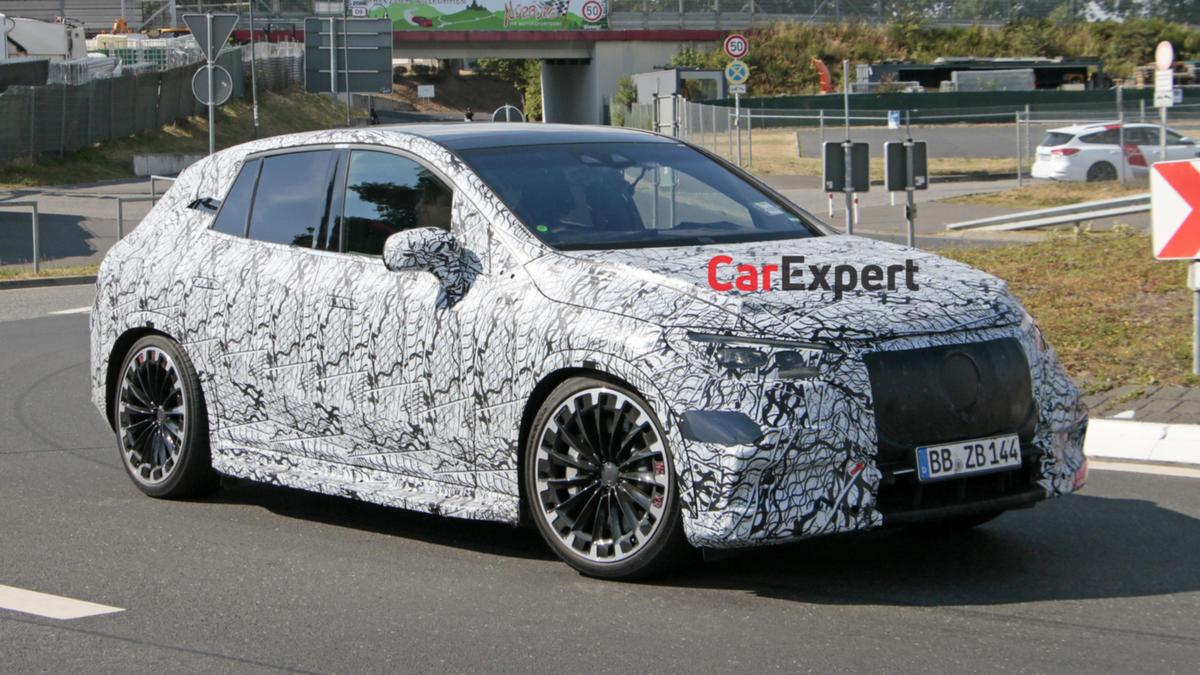 The Mercedes-Benz EQE SUV is taking shape, and it’s arguably one of the most important models in the brand’s electric vehicle (EV) roll-out.

Our spy photographers have captured what’s believed to be the high-performance Mercedes-AMG EQE 53 SUV during testing at the Nurburgring.

The EQE SUV is set to be the fourth model built on the dedicated Electric Vehicle Architecture (EVA), following the EQS liftback, EQE sedan, and EQS SUV.

For more Motoring related news and videos check out Motoring >>

In simple terms, think of the EQE SUV as an all-electric alternative to the internal combustion-powered GLE.

It’s expected the EQE SUV will mirror the drivetrain and battery specifications of the existing EQE sedan, including the AMG versions.

The AMG EQE 53 4Matic+ sedan is powered by a dual-motor all-wheel drive powertrain producing total system outputs of 505kW of power and 1000Nm of torque with the AMG Dynamic Plus package selected.

The AMG EQE 53 4Matic+ and all other EQE sedan variants, including the AMG EQE 43 4Matic, use a 90.6kWh lithium-ion battery pack.

As previously reported, the EQE SUV is set to debut at the Guangzhou motor show in November 2022. It’s almost certain to come Down Under as well.

The EQE SUV will be built alongside the EQS SUV at the German automaker’s Tuscaloosa, Alabama plant alongside the GLS and GLE, and use batteries produced at a “state-of-the-art factory in Bibb County”.

We’ve previously seen spied prototypes of the regular EQE SUV a number of times with its soft, round, and almost blobby design, but the AMG EQE takes the design up a notch with AMG alloy wheels and large brakes.

This spied AMG EQE 53 prototype also appears to have a lower ride height than the previously spied regular EQE SUV prototypes, as well as a sportier front fascia.

Although we haven’t seen the inside of the EQE SUV yet, it’s expected it will share a great deal with the EQE sedan. This precedent was previously set with the similar interiors of the EQS and EQS SUV.

The Mercedes-Benz EQE SUV could become a critical model for the German automaker as production of the current EQC is reportedly ending in 2023.

The EQC is the brand’s first electric vehicle from the EQ family and is derived from the outgoing GLC.

From 2025 Mercedes-Benz will launch three all-electric architectures. The main platform will be MB.EA, which will underpin all medium to large vehicles.

This will be complemented by AMG.EA for performance cars, and VAN.EA that will form the basis for vans and light commercial vehicles.

Mercedes-Benz will also debut the “electric-first” MMA small car platform in 2024 too.

The German automaker has previously announced that it’s going all-electric by 2030, where market conditions allow.